Street Preaching Against the Devil Idol

We visited a city in the east of Thailand where there is a large Naga snake idol. Supposedly this is a serpent which covered the Buddha from rain while he was meditating towards “enlightenment.” One day we found three junior high school students sitting by the river. We gave them some gospel tracts and Khae shared with them from the Bible for about half an hour, asking them whether they believe in God, believe in the Naga serpent, where they will go when they die, etc. These students listened very well and had interesting responses and questions as well. It is unusual to have an in-depth conversation like this in our cell phone saturated globe. Please pray for these young ladies. Here is a picture. Later that day, we went to a part of the river near the huge Naga idol. It is interesting that in the Thai Bible, in Revelation 12:9, the Thai word used there is “paya-naak,”-- the “naak” part of that is a direct reference to Naga. The Thai Bible explicitly says that the Naga is the devil. But, in Buddhism this is a revered deity—often the most prominent feature at many Buddhist temples.

After preaching about that, I also looked up the Hebrew word, in Genesis 3:1, which interestingly is not far removed from the Sanskrit “Naga” and Thai “Naak”—in Hebrew the word used there for serpent is “Nakash.” Here’s a picture of that idol with a man bowing down to it. 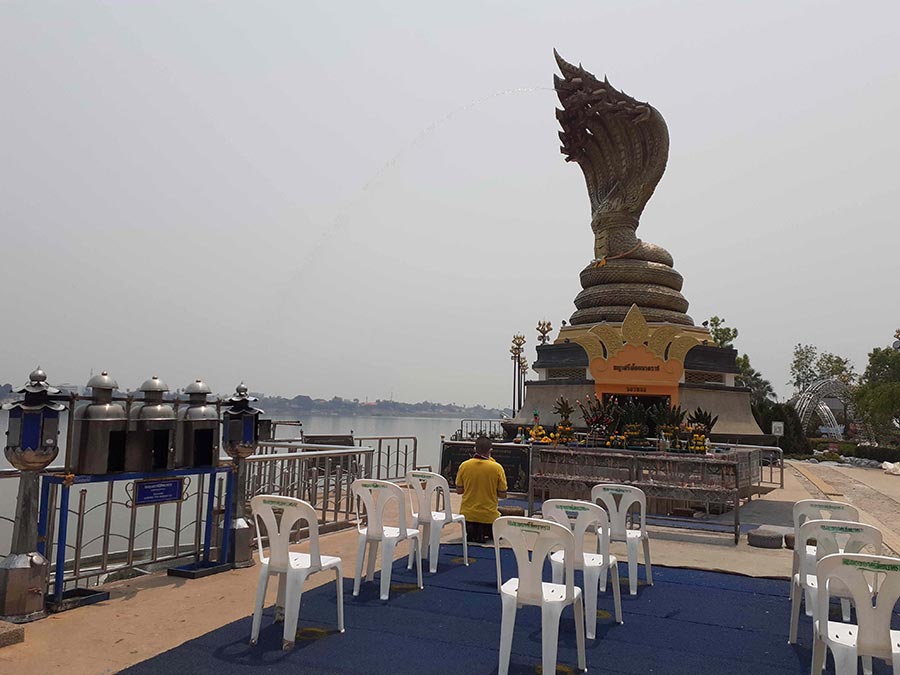 At the Mekhong river, I preached a very direct message against the Naga serpent-- Naga is a deceiver, an evil spirit—the devil. But, in contrast Jesus Christ loves us and died for our sins on the cross. Christianity is not a foreign religion. Jesus is the Creator of all people. Every nation and people group stems from Noah and his family, who survived the global flood about 4300 years ago. We should not put our faith in Naga, the deceiver, but rather in Jesus Christ who is God Almighty—holy and true, and who loves people and is calling them to get right with him. Most of my listeners were sellers of lottery tickets, as well as people walking by, and a man playing his Thai equivalent of a banjo for money. Khae handed out tracts, and Micah also recited some Bible verses.

Most people received a tract and listened well, but one woman was adamant about her faith in Naga. I told her clearly that Naga is the devil and will lead her to hell—the Bible says so, but Jesus is the Savior who loves us.

Khae said she felt afraid when I was preaching, because I confronted the Naga belief directly—maybe someone would call the police or attack me. I must admit I also felt nervous, but I was thinking of how many people continually tell us that “all religions are good.” I wanted to make it clear that not all religions are good, and that only Jesus has fulfilled prophecies and is God in the flesh, and that only He can wash away our sins and take us to heaven—other “ways” are deceptions.

I’m certainly no John Wesley, but afterwards I recalled Wesley’s quote that he preferred if people either repented or were angry at his preaching, rather than just being indifferent. Thinking back now I’m glad I gave that message, and it did seem that many people were listening rather than just ignoring it. May God convict them of idolatry to repent and get right with the God who loves them. Khae also said God gave her comfort when she was praying while I was preaching.

Khae and I continue teaching at Isaiah and Micah’s school. We’re teaching emotion words, paper airplane vocabulary and the Bible. It’s a great opportunity to share the gospel with our class of nineteen 5th and 6th graders.

This month I taught on Luke 24, the last chapter of Luke. It has taken about two years to finish teaching through the book of Luke. I also summarized the differences between the Old and New Testaments, and how Jesus fulfilled everything for us.

With the guard’s permission I gave one woman who is good in English a copy of a booklet I wrote of Old Testament prophets who in their lives foreshadowed the coming of Jesus Christ—and I gave one example in Thai about Moses. Truly the Bible is an amazing book, containing not only over 300 verbal prophecies of Jesus Christ, but also prophecies in the lives of the prophets which foreshadowed Jesus’ life—like multi-layered transparencies (before the days of Powerpoints), which with the addition of each transparency page give a fuller picture, which ultimately was fulfilled in Jesus. Modern Jews mostly don’t know what tribe they are from, and it doesn’t matter anymore, because all of the genealogies pointed to Jesus Christ, in the line of Judah. The temple is no longer there, and it doesn’t matter, because Jesus is the fulfilment of what the temple stood for. Animal sacrifices are no longer practices, and there’s no longer a Levitical priesthood, and it doesn’t matter, because…well, you get the picture. I’m attaching here the booklet of the prophets whose lives foreshadowed Jesus.

At Asian Mission Fellowship (AMF) we still have a core group of families and occasional visitors who are unbelievers. One young man in particular, although he is an unbeliever, has attended regularly. Please pray for him. His name is Momo.

Jallay and family continue to teach a weekly Bible study for a Ba-Dong group, most of whom are from Catholic or Buddhist backgrounds. Thank you for your prayers for this outreach and other cell group outreaches.

Just yesterday, our 84 year old friend, Bill Cook, went to be with Jesus. Some of you have met him. I believe he is now experiencing the joyful result of his faith in Jesus. Here are some of his testimonies in English. I also have some of his testimony videos in Japanese for any of you who are interested in those. Bill came to preach at the Burmese church early this month with translation from English to Thai to Burmese. It was a very good evangelistic message from John 1, I think the last sermon he gave on this earth.

And, here’s an apologetics video I made about the global flood about 10 years ago. Bill helped me make a scale sized ark at that time (about 40 times smaller than the biblical dimensions)…

And, here’s one picture of the Lahu outreach in Mae Ai. Thank you for your prayers and support.